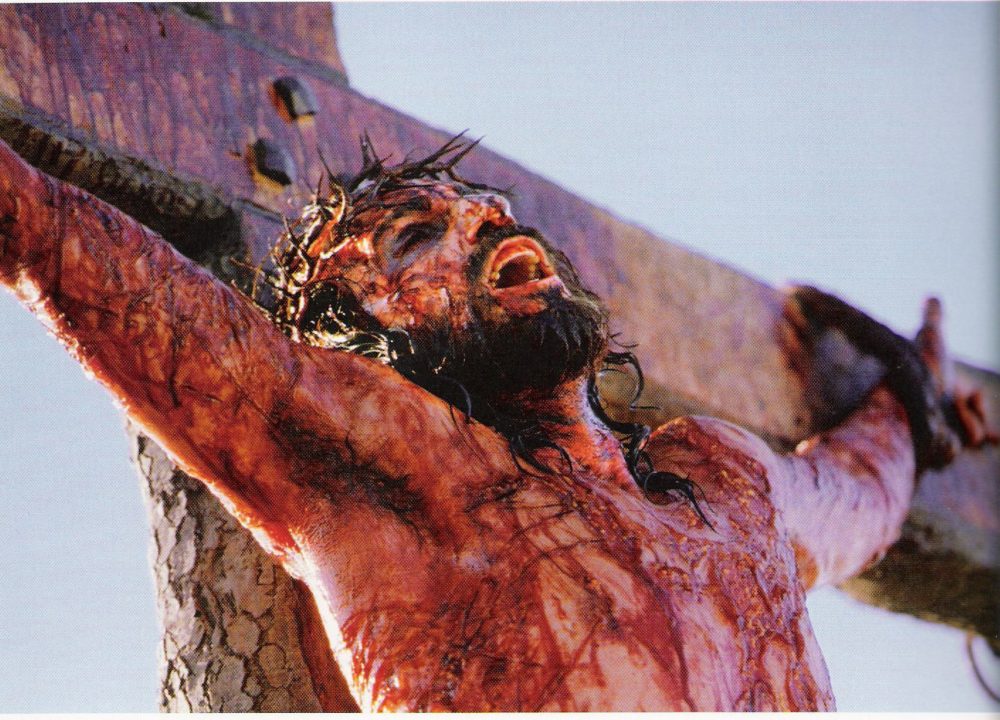 The Passion of the Christ is a 2004 biblical drama co-written, produced, and directed by Mel Gibson. Jim Caviezel stars as Jesus of Nazareth.

The movie is told mostly in line with the gospels of Mark, Matthew, Luke, and John. It also draws on other devotional writings and pious accounts.

The plot centers on the last 12 hours before the death of Jesus. It deals with the garden of Gethsemane, Judas Iscariot’s betrayal, the scourging, Mary’s suffering, Christ’s crucifixion, and a brief glimpse at the resurrection.

Interweaved with this are flashbacks to specific moments in the life of Jesus like The Sermon on the Mount and The Last Supper. These scenes are biblically-based, but there are some scenes that use creative license.

The film was mainly shot in Italy. The dialogue is in Latin, Hebrew, and Aramaic. There are subtitles, although Gibson didn’t initially want these.

“Steeped in controversy and polarizing critics, The Passion of the Christ grossed over $600 million worldwide.” according to Scott Cooper Florida.

The Passion of the Christ Plot

Jesus is in the garden of Gethsemane as the action begins. He prays as his disciples are sleeping. Satan appears to Jesus and tempts him. He says that nobody can bear the burden expected of him, to suffer and then die for the sins of humanity. As a snake emerges from the form of Satan, Jesus hears his disciples calling. He rebukes Satan by crushing the head of the serpent.

Judas Iscariot, one of the disciples of Jesus, is bribed 30 pieces of silver to betray Jesus. He leads temple guards to the forest where they arrest Jesus. Peter slashes the ear of a guard. Jesus heals this injury while reprimanding his disciple. The disciples then flee and Jesus is secured by the guards. They beat him en route to the Sanhedrin.

John tells Jesus’s mother Mary and also Mary Magdalene about the arrest. Peter follows Jesus. Mary Magdalene tries and fails to get a Roman patrol to do something.

Caiaphas holds trial and Jesus replies “I am” when asked if he is the son of God. At this point, Caiaphas rips his robes in range and condemns Jesus to death for blasphemy. Peter flees and Judas tries to return the money he was paid, but the priests refuse. Judas is eaten up by guilt, leaves the city, and hangs himself.

Caiaphas then sends Jesus before Pontius Pilate to be sentenced to death. Pilate transfers him to the court of Herod Antipas. Jesus is found not guilty and returned, so Pilate gives the crowd the choice of releasing Jesus or chastising him. Pilate sentences Jesus to severe flogging. He is scourged, mocked, and abused by the guards. They put a crown of thorns on his head and taunt him by saying “Hail, king of the Jews”.

Jesus carries his heavy wooden cross to Calvary. A woman offers Jesus some water but the guard throws it away. Jesus is beaten by the guards on the journey to Golgotha. Eventually, Simon of Cyrene is forced to carry the cross with him. Jesus is crucified with his mother Mary and Mary Magdalene witnessing it.

Jesus prays to God the Father from the cross asking forgiveness for those who wronged him. Surrendering his spirit to the Father, Jesus dies. A drop of rain falls and triggers an earthquake. This razes the temple. Satan is defeated. Jesus’s body is taken down from the cross. Jesus then rises from the dead and exits the tomb with visible wounds on his palms.

Gibson originally stated he would use old languages without subtitles, relying instead on film storytelling, as the story of the Passion is well known. The script was written in English then translated into Latin and Aramaic.

The movie was produced independently. It was shot in Rome, Italy at Cinecittà Studios, and also on location in Matera and Craco in the Basilicata region.

The Passion of the Christ was released on Ash Wednesday, February 25, 2004.

Gibson started production without outside funding or distribution in place. 20th Century Fox passed on the deal then Gibson decided to distribute the film himself along with Newmarket Films.

Instead of the usual film marketing formula,  Gibson utilized a small-scale TV ad campaign with no press junkets at all. Church groups all over heavily promoted the film.

After earning over $83 million in its opening weekend at the box office, the film ended up grossing over $370 million in the domestic market. Worldwide earnings were over $612 million.