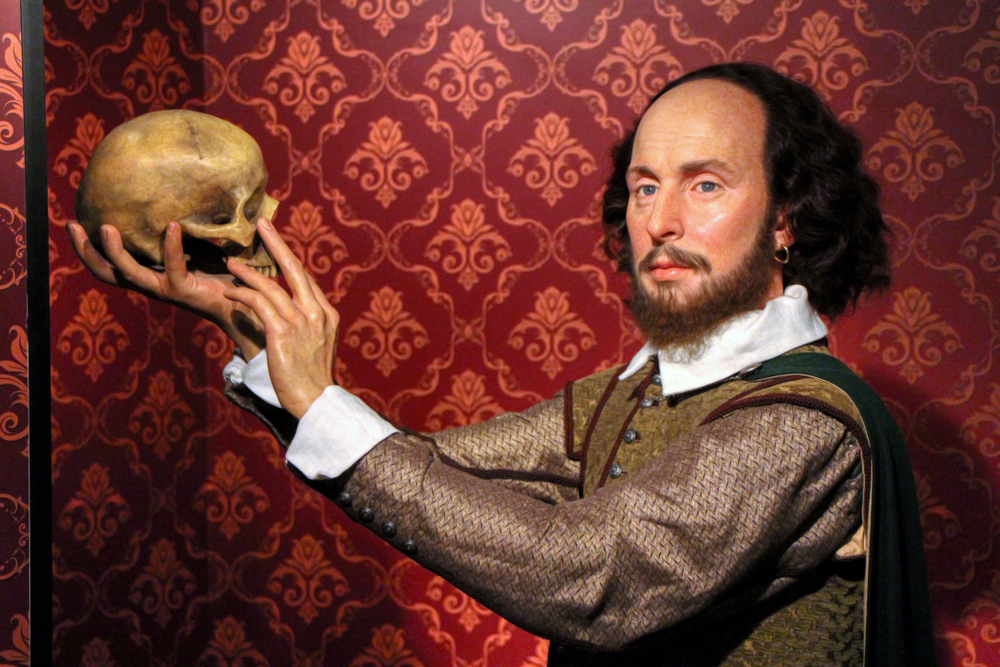 Written over 400 year ago, William Shakespeare’s words are timeless and endure today. The Bard of Avon had an uncanny ability to tap into universal human emotions using broader themes that remain relevant in the twenty-first century.

Many phrases that have penetrated the modern lexicon can be traced back to Shakespeare. “Break the ice” comes from The Taming of the Shrew, “wild-goose chase” from Romeo and Juliet, “love is blind” from The Merchant of Venice, and “be-all, end-all” from Macbeth.

Phrases from Shakespeare live on today in pop culture. The actress Megan Fox has a line from King Lear tattooed on her shoulder: “We will all laugh at gilded butterflies“.

This quote from the sixteenth-century play The Merchant of Venice means appearances can be deceptive.

Shakespeare used the word “glisters” in the play. This is an archaic synonym for “glitters”.

Whether ’tis nobler in the mind to suffer

The slings and arrows of outrageous fortune,

Or to take arms against a sea of troubles,

And by opposing end them. To die: to sleep…”

While the original “question” referenced hinged on humankind’s internal debate  about the benefits and drawbacks of human existence, the question can be more broadly applied to a wide range of situations. As with all famous Shakespeare quotes, the universality of the message gives it enduring appeal.

3. “Uneasy lies the head that wears the crown.”

This phrase sometimes transposes “uneasy lies” with “heavy is”.

4. “The robbed that smiles, steals something from the thief.”

This phrase means the same as “grin and bear it.” The words of the Duke of Venice serve as advice when you’re wronged. He claims that by refusing to show you are upset, you remove that trademark sense of satisfaction from the wrongdoer.

And it must follow, as the night the day,

Thou canst not then be false to any man.”

This famous line from Hamlet was given by Polonius as a sort of pep talk. The theme of sticking to your values even if you’re faced with a tough dilemma has endured through the generations and is still relevant today.

6. “Cowards die many times before their deaths; The valiant never taste of death but once.”

Caesar uses death as a metaphor to soothe his wife who fears she may die soon. This call-to-arms still resonates today.

7. “Men at some time are masters of their fates:

The fault, dear Brutus, is not in our stars,

But in ourselves, that we are underlings.”

Cassius tries to convince Brutus to join with the assassination plot against Caesar.

He wanted to convey the idea that you can control your destiny and that you’re not pre-determined to do certain things by a divine power.

“Et tu, Brute?” a Latin phrase translated as “Even you, Brutus?” has grown to also signify a loved one unexpectedly betraying you.

By any other word would smell as sweet…”

Juliet’s line above refers to the warring families and state that their names — the Montagues and Capulets — shouldn’t stand in the way of their romance, nor define who they are. Rather, Juliet implies that that a is nothing more than a collection of letters.

That I shall say good night till it be morrow.”

This phrases from Romeo and Juliet’s balcony scene, are spoken as Juliet says goodbye to Romeo. The phrase seems paradoxical as Juliet speaks of the sadness of departing from a loved one juxtaposed with the “sweet” excitement of imagining their next meeting.

And all the men and women merely players:

They have their exits and their entrances;

And one man in his time plays many parts.”

Jaques speaks these words in the seventeenth-century comedy, As You Like It. The contention here is that life follows a script with people playing certain pre-ordained roles.